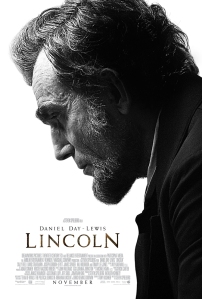 This my be the hardest film of the year to review. Usually the reviews here delve into the thematic elements and look at the underlying messages of movie, but in Lincoln it is all on screen. The messages of equality and freedom ring just as true today as they did those many years ago. The clarion call to do what is right in the face of impossible odds should be the modus operandi of our politicians and citizens today, yet is seldom is. Doing the right thing for the people may not always be what is popular. Strong conviction and faith in what is right, true and good were the hallmarks of Lincoln. Was he a perfect man or president? No. His life had many failures but what he left behind was a legacy of greatness. This came, not from him placating to the masses, but to his unwavering commitment to what was right.

The acting is superb. Daniel Day-Lewis is the soul of the film; bringing Lincoln to life fully. Lincoln is not just a man on a pedestal but real and authentic. He has the homespun wit and accumulated knowledge from years of reading and listening. He empathizes with people, and yet had the will to see done what he knows must be accomplished. Day-Lewis should be nominated for an Oscar this year and win for his powerful portrayal of our 16th president.

Tommy Lee Jones, Sally Field, Joseph Gordon-Levitt and David Strathairn all give command performances.  Williams minimalist score works to perfection here, never taking away from the scene but giving it that magic to bring it to perfect culmination. Lastly, Speilberg has created an American masterpiece that is the best picture of the year. Nothing could be more timely after and election that has left many disillusioned. This film is a reminder of what a government for the people, by the people looks like. Not men or women worried about reelection and popularity, but committed to doing what is right for all.

Four score and seven years ago our fathers brought forth on this continent a new nation, conceived in liberty, and dedicated to the proposition that all men are created equal.

Now we are engaged in a great civil war, testing whether that nation, or any nation, so conceived and so dedicated, can long endure. We are met on a great battle-field of that war. We have come to dedicate a portion of that field, as a final resting place for those who here gave their lives that that nation might live. It is altogether fitting and proper that we should do this.

But, in a larger sense, we can not dedicate, we can not consecrate, we can not hallow this ground. The brave men, living and dead, who struggled here, have consecrated it, far above our poor power to add or detract. The world will little note, nor long remember what we say here, but it can never forget what they did here. It is for us the living, rather, to be dedicated here to the unfinished work which they who fought here have thus far so nobly advanced. It is rather for us to be here dedicated to the great task remaining before us—that from these honored dead we take increased devotion to that cause for which they gave the last full measure of devotion—that we here highly resolve that these dead shall not have died in vain—that this nation, under God, shall have a new birth of freedom—and that government of the people, by the people, for the people, shall not perish from the earth.

7 thoughts on “Lincoln – A Movie Review”