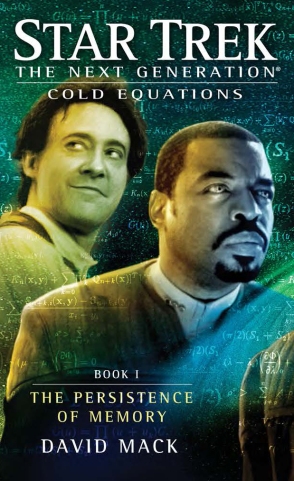 In October 2008, David Mack changed the face of the entire 24th century with the release of his book “Gods of Night.” This was the first book in the Star Trek: Destiny series, and this final showdown with the Borg not only wreaked on the galaxy, but it sent the novels on a new course.
Now in November 2012, David Mack has a new Trek release that is the beginning of a trilogy. Like his previous trilogy, it is again shaking up the 24th century like a Boggle board. What comes next is anyone’s guess.

This novel is bookended by events in the current Prime timeline. The majority of the book is a flashback to the life of Dr. Noonien Soong, who tells the Enterprise away team the incredible tale of how and why he is not dead, as well as his involvement in the plot to steal all of the Soong androids from The Daystrom Institute.

The story he weaves leads to many “ultimate questions” about life; the first is “what do we live for?” A younger Soong was driven by the will to be the best cyberneticist in the galaxy and to outlive death. In his creation of androids, he has done it not only for the enjoyment of creation, but because he would like to become an android himself. He desires to cast off this mortal coil and live forever in a body that will not rust or die. He even confesses that this is the reason why all of his androids look like him. His goal for immortality is to become powerful enough, behind the scenes, so he can influence the future for sentient artificial life in the galaxy, as well as furthering the advancement of those lifeforms.

But what happens when you find out that you are not the best at your work, that all you live for pales in comparison with another’s work? What do you do when all that you have lived for comes crashing down and you are left realizing it’s not enough? Do you keep fighting, knowing you will never ellipse others or do you find a new dream, something new worth living for? What has been driving Soong all his life are these cold equations. He has been preoccupied with self and accomplishment, making these the pinnacle of his life, and when they fall short, he is left with nothing. He confesses to himself,

“If only I could have died rather that live to see this day… I could have met my end believing that my genius was without equal, that my son was immortal, that my legacy would live on. Instead I’ve seen my greatest works made obsolete. My sons are dead. My only true love lies in the arms of another. I am forgotten. Everything I’ve done has been for nothing. And it’s all my own fault.”

Soong finds out that immortality and greatness are fleeting things. Without the companionship of others and the legacy of family or friends, greatness is always surpassed. The big change for him comes when he turns his attention from living for himself to living for others. Soong realizes that he can save his sons, B4 and Data. He sees the error he has made and the pain that he has caused to his sons. In all his striving to be the greatest, he has sacrificed his creations on the altar of science and discovery, but “…the universe punished me for my hubris.” Soong lets all of those “dreams” go. His dedicates his life to being the father he never was and finding a way of salvation for his sons; “It’s time I was more to my son than a creator figure, distant in time and memory; it’s time I started acting like his father.”

Soong makes the ultimate sacrifice in the end. He shows the greatest love one can for another by giving his life and his body to his son. Soong echoes the words of another great father, Jor-El from Superman: “You will make my strength your own. You will see my life through your eyes as your life will be seen through mine. The son becomes the father, and the father – the son.” Soong gives Data not only new life, but one in which he shares the memories of his father — all the knowledge, lessons and wisdom that Soong has accumulated — are now part of Data.

The Data that returns is not the same Data that we knew. Mack has given so many people what they have wanted in the return of Data, and yet he has also given us something completely different. This is not just Data. He is also Soong. Like a Trill that is given a symbiont, Data has become an amalgamation of himself and his father. He is in essence a new being. This opens the door for many different stories in coming years.

This merging of the two also speaks to the power of memory and its persistence in driving us. Memories, good and bad, influence our actions. Soong says to Data during the transfer, “When you wake up, you’ll see the future through my eyes and shape it in my hands. You’ll inherit my life, body and soul.” Many of the memories and drives that Soong had are combined with Data’s and give him a new course of life. The memory of his mother being alive gives him a new pursuit, but unlike his father, he is not in it for selfish reasons but for the benefit of his daughter.

Do Androids Go to Heaven?

As Data and Soong merge and become one, a question arises: What makes something or someone a sentient being? Do androids dream? What is it about something that makes it fully alive and fully functional as a living soul? These questions have been asked by Star Trek through characters like Data or The Doctor. As Soong transfers his consciousness into his new android body, the question becomes, “Is Soong still completely human?” He has gained so much in this transfer. He will never age. He remembers with complete and utter clarity everything that happens to him. He is quicker, faster and almost perfect in many ways compared to his old, organic life. Yet with all these advancements, he loses abilities. He can no longer get drunk and cannot feel that visceral reaction in the pit of his stomach when something angers him or goes horribly wrong. In all that he gains, the things he loses are the very things that set organic beings apart from the synthetic.

One of the most fascinating questions comes from the idea of the soul and the possibility of creating one. Or, is the soul exclusive to organic life? Soong says this of the soul:

“A soul flickers in my hands, its spark of awareness fragile and faltering. What else would you call a naked brain, disembodied but alive? Philosophers have spent millennia trying to define the essence of the soul, and science has had its hat in the ring for a few centuries now. So far, the best explanation I’ve been able to devise is that the soul is the core of sentience, the seed of knowledge that tells us we’re all nothing more than conglomerations of stardust and borrowed energies – and nothing less that unique cells of awareness, expressions of a universe that wants to understand itself and needs intelligent life to act as its agents in time.”

Is he right? Is the soul something so trivial and mundane that it could be manufactured if the creator is smart enough? Do all good androids go to heaven? In Star Trek, we do see evidence of the existence of the soul, as the purely spiritual and metaphysical essence of a person. For instance, Spock’s katra lives on after he dies and Janeway exists as her soul in The Eternal Tide, that wholly quintessence of being beyond the organic or physical plain. Even the Q do not know what waits after death, but Janeway knows there is a power beyond that will be there if she chooses to go on. On the other hand, if an android is turned off and its body is destroyed, does anything live on? The answer seems to be no. Sentience may occur in an artificial lifeform, but a soul is something different entirely. Can a person create what is indivisible, spiritual and metaphysical in a lab and impart that to and artificial lifeform, or is the soul something that can only be begotten by the universe and whatever is behind it? The question won’t be answered here, but David Mack does what all good Star Trek authors and episodes have done and given us questions to ponder and evaluate.

This book was a marvelous beginning to what will surely be a landmark in the Star Trek universe. David Mack gives us deep questions wrapped in his hallmark wit and action. I highly recommend this book. It should be noted that David Mack has said that the inspiration for this series came from the book Immortal Coil by Jeffrey Lang. If you want a full understanding of the background to this story, I recommend reading that book as well. On the other hand, Mack did say on the TrekBBS that he tried to give the reader all pertinent information from Immortal Coil in Persistence of Memory, so you needn’t worry if you cannot get to Immortal Coil. This book is rated 9 barrel rolls out of 10, since Geordi does a barrel roll in this story.