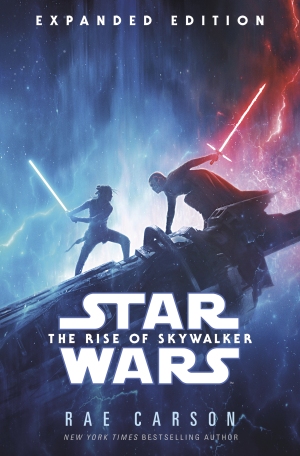 The Rise of Skywalker brought the Skywalker Saga to a close. If there was any criticism this reviewer had of the film, it was that the movie should have been longer, to allow scenes to breathe more, giving us more background, as well as more character moments. Thankfully Rae Carson’s expanded edition of the novelization is here to do just that!

Novels have some distinct advantages over movies and one of the biggest is allowing the readers to be inside the minds of the characters and understand what they are thinking in pivotal scenes. The Rise of Skywalker novelization is no exception. There are many key moments where Carson has been able to expound on an important point in the film through getting inside what a characters are thinking.

Much has been made of the ways the novel is able clarify or add to the understanding of certain revelations from the movie and they’ve not been exaggerated. Almost every expanded scene in the book should have been in the movie. Most of them would have added minutes, at most, to each scene, but what they do for the story is significant. Reading the book can be a frustrating experience because it will leave you scratching your head as to why so much of this was not included into the finished film. Some of these things can be read into the movie through what is given, but the explicitness the book gives to these scenes, honestly improves the story.

Rae Carson’s lead-in to Solo, Most Wanted was a great book and her work here lives up to that. She was able to perfectly expand on The Rise of Skywalker. The Revenge of the Sith is the gold standard of Star Wars novelizations, The Rise of Skywalker is the second. The way this book adds to the movie and expounds on it, makes the film better. It is rated 4.5 out of 5 stars.

One thought on “Star Wars: The Rise of Skywalker: Expanded Edition – Review”