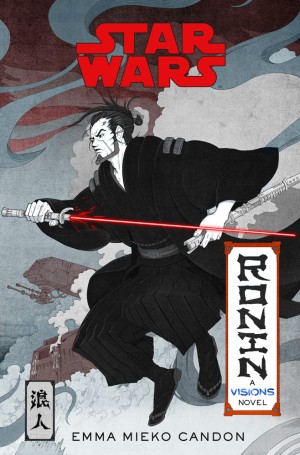 In celebration of Star Wars: Visions, which was released on Disney Plus in September, Del Rey Publishing has released a novel based on the first episode, The Duel. The beginning of the book is the episode retold, then continuing the story where the episode left off.  This allows author Emma Mieko Candon to expound on the world presented in The Duel. The closest Star Wars has come to this type of story before were the Infinities comics from the early 2000s. Ronin feels like the elseworlds stories one finds in comics, exploring Star Wars from a completely different point of view.

Since Disney bought Lucasfilm, all books and comics have been considered canon, so the publishing of this book is puzzling. Each of the previous books has worked to add something to canon, giving fans a greater understanding of characters motivations, events in the timeline or whole new eras not seen on screen. Since Ronin is based on Visions, it doesn’t add any of these things. Some fans are going to love this. The book is well written and does a good job of immersing the reader into the elseworld created in The Duel, fleshing out the ways it differs from the main Star Wars universe.

Sadly, the book doesn’t work. Star Wars is a universe with a specific set of rules which set it apart from other works, giving it,  its Star War-ness. The episodes of Visions worked because they were bite-sized entries, a creator’s love letter to the Star Wars universe with a twist. Here, presented as a novel, the story overstays its welcome. It feels overly long at 331 pages which would have been fantastic if it had not been in the Star Wars universe at all, but its own universe. Adding the language of Star Wars to something, doesn’t make something Star Wars. As such, the book just doesn’t work. Ronin is rated 2.5 out of 5 stars.

This review was completed using a copy of Ronin provided by Del Rey Press.