“A flaw more and more common among Jedi.” 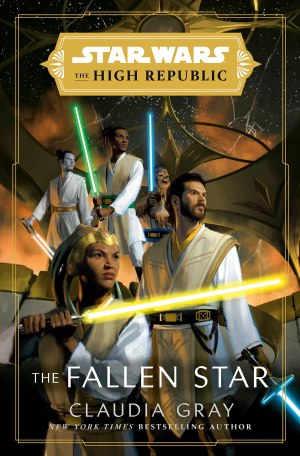 Pride Goes Before The Fall

Proverbs are such because of the truth held in them and none is more true of the Republic and the Jedi in The Fallen Star. The Republic, Jedi included, have become drunk on their own hype and because of that, they have underestimated the Nihil. One would have thought that after the hyperspace disaster and the Republic Fair fiasco, the Republic would have taken the threat of the Nihil much more seriously. To their detriment, they’ve trivialized the threat and Marchion Ro takes full advantage. He masterfully plays the Jedi, preying upon their hubris and compassion leading to the destruction of Starlight Beacon.

This theme of pride is echoed in a few different characters throughout the story to help drive the point home. It does seem a bit strange that this theme has already been covered in the Prequels and with this being set 200 years before that, you’d think that the Jedi would not be struggling with this so much already. It is a great theme to cover, but it doesn’t feel like new territory, which is frustrating.

I hate spoilers and for some inexplicable reason, the marketing for this book gave away that Starlight Beacon was going to be destroyed and that there were going to be quite a few deaths. This makes reading this book a strange experience since you’re never surprised when someone dies and knowing that Starlight is going to be stardust by the end takes a lot of investment out of the reading.

The deaths of major characters also lacked a lot of the punch that you’d hope for and this stems from a complaint I’ve had about the series since it started. There has been too much going on. The High Republic has felt like someone was creating a tree and started with the branches instead of the seed. With so many characters and storylines, happening in so many different places (comic, middle grade, young adult and adult books), it has been hard to connect emotionally to the characters. I’d love to say I was moved by any of the deaths, but I just wasn’t.

The most interesting thing about the book was the new threat that the Jedi face. Readers will know it as the Great  Leveler, which was first seen in The Rising Storm. It feels like an ysalamiri, force-dementor, fear monster that preys upon Jedi, smothering their connection to the Force, paralyzing them with fear and turning them into husks. It is an interesting parallel that the Nihil started the series by disrupting hyperspace thereby throwing the Republic into chaos. Now, they threaten the very fabric of the universe and the Jedi by disrupting the Force. This new threat feels a little on the nose as the incarnation of “fear” itself, but it has potential, so only time will tell how well it works.

The Fallen Star benefits from Claudia Gray’s deft writing, this book breezes by, but it is not as polished as her previous work. There are some issues with the editing of the story and some logical issues with plot points along the way that pulled me out of the book. There were a few times when something happens and all I could think was, “Why didn’t they just do that earlier? More people would have been saved.”. The Fallen Star is a good read but unfortunately not great, it is rated 3 out of 5 stars.

This review was completed with a review copy of Star Wars: The Fallen Star from Del Rey Publishing.