I have thought about writing a written review for this, but there is so much to talk about that I am not sure I would do it the justice I have on the podcasts I’ve recorded. I may still sit down and write something, possibly a series, focused on key areas, but until then, please enjoy my thoughts on Aggressive Negotiations and The 602 Club!

A long time have they waited…and you have too. It’s the inevitable reaction show to Star Wars: The Rise of Skywalker from the Jedi Masters themselves.

Star Wars: The Rise of Skywalker.

The wait is over, the final film in the Skywalker saga is here, again (for those that are old enough to remember the last time it was here with Revenge of the Sith) and JJ Abrams is back to wrap up this Sequel Trilogy that he began in 2015 with The Force Awakens.

In this episode of The 602 Club hosts Matthew Rushing and Christy Morris welcome Bruce Gibson to talk about Star Wars: The Rise of Skywalker. We discuss leaving the theater, Rey’s answers, the Dyad, Bendemption, confronting fear, the rise of Palpatine…again, new and old characters, the Sith, The First Order, The Final Order, too many reversals, old friends return, the final score and our ratings.

The Star Wars podcast that I do with John Mills is doing a review contest on iTunes. We are offering an ultra exclusive t-shirt to the winner. All you need to do is leave a star rating and review for the show in iTunes (only open to the US) to be entered in the drawing. Even those who previously wrote reviews will be entered. You’ll get the awesome shirt pictured here in your size. All for about 2 minutes to help out our show! Please share with as many people as you can and best of luck! Contest ends May 1st. 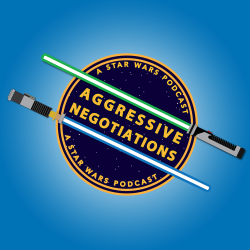 I have recently begun a new podcasting adventure with my good friend John Mills called Aggressive Negotiations. It is a Star Wars podcast and yet not your usual Star Wars show. We do not cover any news or current Star Wars evens, we cover the things you talk about with your friends. We are just two guys who enjoy contemplating the silly, the serious and everything in-between about the Star Wars saga. I hope you will join us for our 30ish minute shows as we talk about a fun new topic each week. You can find us on our website as well as iTunes. Check us out, let us know what you think and help spread the word!

The Journey to Star Wars: The Force Awakens.

In this supplemental episode of The 602 Club Jedi Masters Matthew Rushing and John Mills dive into some of the new Star Wars books released on Force Friday. We talk about Weapon of the Jedi about Luke, Moving Target which is Leia’s story and Smuggler’s Run that is a Han and Chewie adventure. While each one of these books takes place in the Original Trilogy era they each include clues to the upcoming movie The Force Awakens. As we dissect each book we look for the clues as well as consider how each story adds to the canon knowledge of Luke, Leia and Han, ending with our final thoughts and ratings. 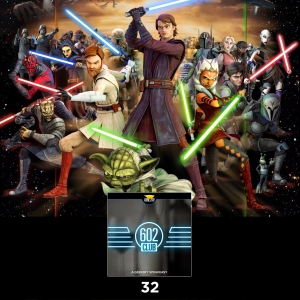 Podcasting can be a lonely business, sometimes you’re just not sure who is listening or what they think about the show. At other times podcasting puts you in touch with the coolest, most wonderful people you’d never have met otherwise.

In this very special episode of The 602 Club host Matthew Rushing is joined by John Mills to talk to Nic Anastassiou who contacted us a few weeks ago about our episode on the new Star Wars trailers. Nic works for ILM and was also an editor on The Clone Wars. We discuss with Nic our first contact, his coming to Star Wars, a toy story, the path to ILM, editing with Dave and George,his journey to The Clone Wars, favorite edits and moments, what makes The Clone Wars special, different ways to view the show, last moments with George and finding Nic online.

It had been 28 years since Superman had last appeared on screen and it had not been the best send-off for the original superhero. Languishing in development hell, year after year, it came down to Bryan Singer and his story of Superman returning from five years away from earth to bring the Man of Steel back to theaters.

In this episode of The 602 Club host Matthew Rushing is join by John Mills and Norman Lao to talk about Superman Returns. We open the show discussing the new Batman V Superman trailer, then talk about our initial response to Singer’s Superman film. being back in the Donnerverse, if this movie needs Superman II, the expectations of the audience, the story, 9/11’s effect, our favorite scenes, the ending, the big shoes the actors had to fill, music, production value and our ratings. 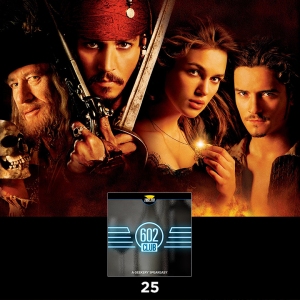 Pirates of the Caribbean.

In 2002 Disney decided to make a film based on one of it’s theme park rides. The Country Bears was a box office flop, yet this did not deter the studio from continuing to mining it’s rides for inspiration. The very next year, Pirates of the Caribbean: Curse of the Black Pearl would become a monster hit, going on to inspire 3 more films with a 5th one currently in the works.

In this episode of The 602 Club host Matthew Rushing is joined by the ladies of Educating Geeks, Alice Baker and Megan Calcote to talk about the original Pirates of the Caribbean movie. We discuss the shock of learning Disney was making a movie based on another theme park ride, the casting, the way the movie winks to the audience, the surprising depth of the story, the music, production value and why this should have been just one film.

Some movies spend years languishing in development hell and Iron Man was one of the longest. From 1990 to 2005 it bounced around from studio to studio; it wasn’t until 2006 that Marvel acquired back the rights and decided to use it as the launching pad for it’s own studio as well as a cinematic universe that the film would finally materialize.

In this episode of The 602 Club host Matthew Rushing is joined by Jose Munoz, Andi VanderKolk and Daniel Proulx to talk about Iron Man. We discuss the long production history of the film, our first thoughts, realism in comic book movies, The cast, the villain, story, music, direction and ask if it still holds up.

Sky Captain and the World of Tomorrow.

It took four years of blue screen shooting in his living room and work on a Macintosh II for Kerry Conran to complete his black and white short of Sky Captain and the World of Tomorrow. Through a friend of his brother’s wife, he was introduced to producer Jon Avnet who shepherded the project into a full-length feature film that would stretch the limits of computer technology.

In this episode of The 602 Club host Matthew Rushing is joined by Megan Calcote and Darren Moser to talk about Sky Captain and the World of Tomorrow. We discuss our first encounters with the movie, the story, the revolutionary nature of the film, the look, the fun sci-fi gadgets, the cast and characters, the music, wrapping up with final thoughts, ratings and why everyone should watch Sky Captain.

There are so many movies that come out in theaters and most of them will not be a mega hit. A majority of movies come and go with little fanfare after their initial run, yet there are some that find an even greater audience beyond the theater. These films become cult classics.

In this episode of The 602 Club host Matthew Rushing is joined by Suzanne Abbott to talk about the cult classic, Dragonheart. We discuss famous dragons, the big themes of the film, the story, some of our favorite parts, the cast, production value, music and give our ratings.