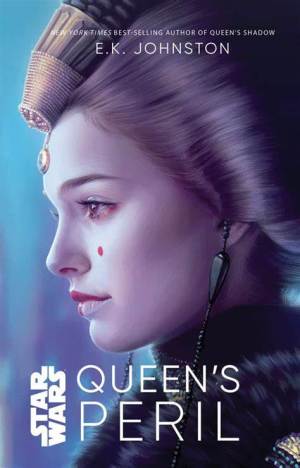 The Phantom Menace introduced viewers to the youngest queen ever elected on Naboo and her loyal handmaidens who not only helped serve her, but also protector in a variety of ways. The depth and the breath of just how this group was formed and came together has often been discussed by fans since 1999. Now, the answers have been revealed, as E.K. Johnson returns to the life of Padmé, as she assumes the role of queen, in the book Queen’s Peril.

The beginning of the book picks up immediately after the election of young Padmé. She is quickly introduced to her new head of security Quarsh Panaka, who has a plan to help keep the queen safe. He wants to revive the use of a handmaiden to be the queen’s protector and when needed, a decoy. Padmé approves of the idea but also improves on it by asking for more than just one handmaiden, she asks for five, so that with her as the sixth, it will be even more difficult for people to know who is the “playing” the queen when a decoy is needed.

Padmé and the handmaidens begin to figure out how this will work between them, what their specific roles will be in the group and how they will work together to make this as seamless as possible. This is one of the best parts of the book, getting to see the team come together. It almost has the feeling of the superhero, team-up origin story, as each handmaiden discovers her talent that adds to their place in the overall group.

The beginning of the book also establishes the way in which Padmé will differentiate herself from the previous queen of Naboo, who was much more of an isolationist and jingoist. Padmé longs to have Naboo establish itself as a friend to neighboring systems and reinstitute better trade relations with them. This is not a completely an altruistic desire on Padmé’s part, since Naboo is struggling with a crop failure, which has them in need of better supply lines from other planets to make up for the loss.

Both of these things play perfectly into setting up the milieu of The Prequels. In many ways Queen’s Peril feels like a prequel to a prequel. Johnson is able to not only show the happenings on Naboo, but we get snippets of what is going on with Qui-Gon and Obi-Wan as well as Darth Sidious to help round out how this all ties in to what we will see in The Phantom Menace.

The book has such a strong, first half but sadly it does not continue the goodwill it created into the second half. The final portion of the book mistakenly plays out through the events seen in Episode I. We see the events through the eyes of the handmaidens, which does give us a slightly different perspective but it’s not enough to justify basically becoming a novelization for the movie that already has a novelization.

Not only does the second half of the book feel like a rehash, but it’s also written in a very choppy format that jumps between different character perspectives. So for example, we might be seeing something through the eyes of one of the handmaidens and then jump to a couple of lines that describe Anakin’s joy in flying, only to jump quickly to another perspective after that. The book truly feels like the tale of two halves.

The first half of this book is very good and was a vast improvement on Queen’s Shadow yet sadly it all falls apart in the second half. Honestly if this story had just been a prequel to The Phantom Menace without taking readers back through the film it would have been a fantastic book. In light of what was given, Queen’s Peril is rated 2.5 out of 5 stars.

This review was completed using a copy of Queen’s Peril provided by Disney Lucasfilm Press.

One thought on “Queen’s Peril – Review”