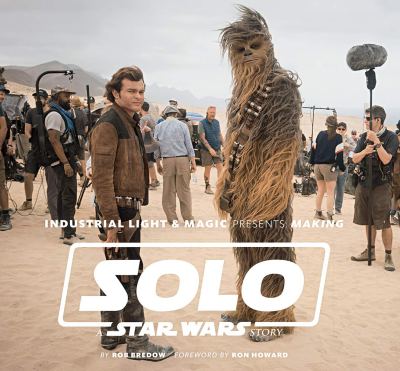 I unabashedly love Solo: A Star Wars Story, so when I heard that there was going to be a “making of” book about it, I was excited. Not only would this offer a look behind the scenes, but it also had the added draw of being authored by Industrial Light & Magic’s own Rob Bredow who had been the VFX supervisor on the film. The idea for this book came to Bredow as he was on set, taking photos for reference and realizing that he was the only one around with a camera. 23,953 photos later and with Kathleen Kennedy’s seal of approval, Industrial Light & Magic Presents: Making Solo: A Star Wars Story was born.

There have been a lot of “making of” books for Star Wars movies, but none have ever felt this intimate. Bredow’s photos are as behind the scenes as it gets, raw and completely in the moment. He captures the essence of what it is like to be on set from pre production to post, making you feel as though you are actually there. Because of his experience working in VFX, the book helps show the relationship this production had between the SFX on set and their partner VFX. Bredow not only breaks down the images he shares but also interviews different people from the production about their part in the movie. His daughter’s interview with DP Bradford Young for a school project stands out as one of the best exchanges and illustrates how Star Wars truly is a family affair, even for those behind the camera.

This book is about being behind the scenes and therefore does give fans a clearer idea of some of the things Lord and Miller were responsible for shooting and where Ron Howard was able to put his stamp on the film. Reading the book will leave you with a whole new appreciation for just how much Ron Howard took on when he agreed to finish Solo. To quote a famous Star Wars character, it was impressive, most impressive.

Industrial Light & Magic Presents: Making Solo: A Star Wars Story is a book best experienced. They say a picture is worth a thousand words and Bredow’s book proves that axiom to be true. If you want a truly immersive look behind the scenes of a Star Wars movie, this is the book for you. This is the kind of book we need more of in fandom, so I encourage you to pick up a copy and support it so we can get more like it in the future. I give this 4.5 out of 5 stars.