J.K. Rowling’s first Harry Potter book was released in the UK in 1997 and created a phenomenon that has lead to the sale of over 500 million books, in the 7 book series. Going back to the beginning, Rowling sells the rights to the series in 1999 for a mere £1 million. By the time that the first movie is released in 2001, there are 4 of the books in the series have already been released and in fact, every movie released will have the next book in the series already out. This means, for every Harry Potter film, there is never a time when people watching them, either don’t already know what happened, because they’d read the books or they could easily go and read online what they missed.

This gives the Harry Potter filmmakers a lot of freedom. If you’ve read the books and seen the movies,  you know how much of the story is left out. Especially as you get to  Prisoner of Azkaban and beyond, whole storylines are absent from the films and even what’s there is rushed for time since they didn’t seem to want  every movie be 3 hours long. Quick example, the end of Order of the Phoenix, and one of the most important chapters in the book is The Lost Prophecy. It’s arguably the most important chapter in the series as it’s finally the place where Harry truly understands his connection with Voldemort and what is to come, “…and either must die at the hand of the other for neither can live while the other survives…“. Yet the movie only gives about a minute to a minute and a half to this pivotal moment. The filmmakers rely heavily on the audience to fill in the gaps with their preexisting knowledge from the books or leave it open for them to look online for answers. The movies, for all their visual wonder are truncated versions of Rowling’s epic.

Why do I bring all of this up?

When the first Fantastic Beasts movie came out, I began to hear rumblings in the fandom that Rowling had lost her touch. It’s a criticism that has only gotten louder in some corners of the fandom with the release of Crimes Of Grindelwald. And one of the reasons why I think this is happening is because we’ve forgotten what it was like to be in Rowling’s world and not already have all the answers.

I started reading the books just as the fourth one was released, so I was part of that long wait for the fifth, sixth and seventh books. Like most fans, I was part of the midnight parties, waiting in line for the book, taking it home and devouring it as quickly as possible so I could then talk to my friends and those online about what I thought it all meant and speculate where it would all go next. It was half the fun of the series.

I can distinctly remember waiting for what would be called, Half-Blood Prince, talking with fans who were just sure it would be call, The Pillars of Storgé. Of course they were wrong, but the conversations had between fans then, was all about their favorite series and the speculation happened because we couldn’t wait to find out what Rowling had in store for Harry and his friends. Most importantly, we trusted Rowling as a writer. She’d already shown us her ability to weave a narrative, as well as truly surprise us. 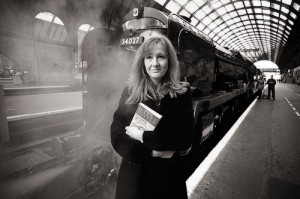 So, what’s changed? Why are people so angry at Rowling and what she’s doing with Fantastic Beasts? Why have we forgotten the fun of eagerly waiting for the next installment of her work, all while having the time of our lives trying to figure out, from the breadcrumbs she’s laid, where the story goes next? We know she is a master at using the tiniest detail to create something completely unexpected and wonderful. I mean,  Deathly Hallows the is the proof. If you look at the structure of her screenplays, it’s very similar to how she wrote her books. You can feel the structure with the way she creates mystery, places people and things in the movies that might not be as important yet, but will play a larger role later. Then, she throws you for a loop by upending the mystery, explaining how what you thought was happening wasn’t quite right.

So what’s changed? I think the answer is that we’re spoiled. We’ve forgotten what it’s like to wait for things. We live in a binge culture. In fact, many people actually wait for a series to be over so they can start them and not have to wait. But this has hurt our ability to just enjoy what’s been given to us and wait for what comes next.

Secondly, the binge culture has also lead to the rise of militant fandoms who obsess about everything and begin to place themselves as gatekeepers over franchises and gods of the created universes they didn’t create. In fact it’s become common place to see people demean someone like Rowling or Lucas for “messing something up” in THEIR universes. Can you imagine Tolkien in the age of social media? He’d be crucified for retconning The Hobbit so that it fit better with Lord of the Rings. I mean the guy literally rewrote parts of his previous book to work with his larger mythology. 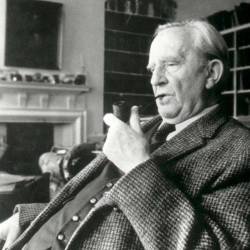 This sense of entitlement and peevishness is destroying our ability to enjoy things. As creators continue on in their creations, there may be things that change over time, but shouldn’t they be given the freedom to do that? It is their work after all. So what if Rowling has decided that McGonagall is older than we thought, does that really hurt anything? If she expands on what we know of boggarts, the Mirror of Erised or anything else, what’s wrong with that? Why do we think that just because we know something about a part of Rowling’s universe that we know everything? She’s continued to reveal things she knows about her creation that we do not and telling the creator they are wrong or have messed something up is the height of arrogance. In many ways, we’ve forgotten how to be okay with not knowing everything and having someone, other than ourselves be the arbiter of what’s “canon”.

The act of creating mythology, universes and stories is one that’s always evolving. As much as Rowling knows about her universe, and from all reports, in every interview with the other people involved in both film series I’ve seen or read, she knows almost everything, down to the smallest detail but she’s also still human. Like every author and creator, there will be things she’ll discover about her world as she expands it and she should be given the freedom to do so. Creation is a shear act of will, it’s been said, but it’s never been said to be perfect (unless you’re God), so maybe we can remember that as we wait for the next film in the Fantastic Beasts series. She has 3 more movies to answer our questions, therefore we cannot expect to have all the answers now, especially when we don’t have books to pull off our shelves to “spoil” the end.

Look for reviews of Fantastic Beasts: The Crimes of Grindelwald on The 602 Club and Cinema Stories podcasts.