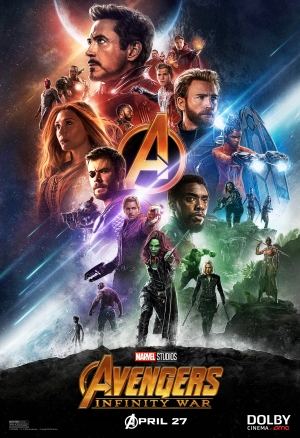 This review contains Mild Spoilers. Don’t forget to look for The 602 Club and Cinema Stories reviews out next week!

Never in the history of film has their been a build up like the Marvel Cinematic Universe. For over 10 years and through 18 films, Marvel has carefully laid out the pieces to it’s master puzzle for Infinity War and the forthcoming Avengers 4. Now, part one of the juggernaut has arrived and the question on everyone’s mind is, “Does it live up?”.

Shrouded in mystery and relegated to end-credit sequences for most of Marvel‘s ten years, he finally comes out of the aether and becomes the saga’s most formidable villain. For all the accolades Marvel has received, it’s greatest area of weakness has been it’s villains. To say this has been fixed in Infinity War is more complicated than a “yes” or “no” answer.

On the plus side for Thanos, he’s what you hoped when it comes to the challenge he presents to these heroes, especially since he does achieve his goal by the end of the film, he does rewrite the universe, leaving only 50% of it alive. The downside is the explanation as to why. Apparently, in the past, on his home planet of Titan, the population had grown too large. Thanos’ solution, just arbitrarily pick 50% of the people, from every walk of life and kill them. Shockingly enough, his people’s leaders reject this idea and it leads to the destruction of his home world.

Ergo he believes the only way to save the entire universe is to enact his aforementioned plan, but on a universal scale. So you could say it does make sense, but only from the most warped point of view and that view is compounded by his god complex. He believes himself to be a god, who is the only one willing to make the hard choice and the power to enact it. He sees his plan as a form of mercy, since those that are left in the universe will have “better” lives as a result.

This leaves Thanos as a middle of the road villain in the Marvel universe. He’s definitely the strongest and most challenging foil for the entire line up of heroes, yet his motivations only raise him slightly above mustache twirlier.

The most frustrating thing about the movie is that it is all set up for the coming, Avengers 4. It’s not bad, but it’s never great. No characters get to truly shine because there is just so much going on, your focus is always divided. And most frustratingly, the “gut punch” moment near the end, is moot, as we know it will mostly be washed away with the coming of part two. Sadly this film feels more mandatory than marvelous.

On top of all this, the action in the movie is rather banal, which is surprising since the Russo Brothers have given us some of the MCU’s most memorable action set pieces in Marvel. There are none of the stand out moments like the Cap vs Winter Soldier or the Cap vs Iron Man moments from Winter Soldier and Civil War, respectively. Instead the action devolves into clichéd CGI battles that lack the heart or character focus which has been a hallmark of the previous Russo entries.

The best thing the movie does is cull the hero herd for part two. Fans know, moving into this final chapter of the first ten years of Marvel, that some of these heroes will not make it past the next Avengers. With the heroes left on the board, the next film will have the time to full make their end what is should be.

Infinity War is a mixed bag that has the effect of one being served a gourmet burger and then only being given a minute to eat it. There is so much happening, yet there’s so little pay off, leaving the audience unfulfilled, wanting a better movie and resolution. We all know the conclusion is coming in 2019, so now that the compulsory is over, we wait and wait and wait. Infinity War is rated 3 1/2 out of 5 stars.