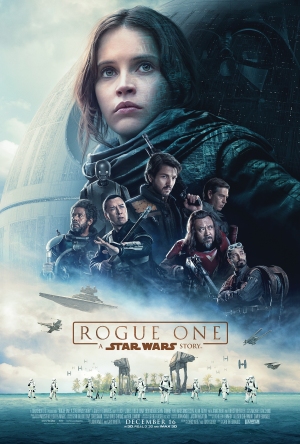 Get The 602 Club episode here!

“It is a period of civil war. Rebel spaceships, striking from a hidden base, have won their first victory against the evil Galactic Empire.

During the battle, Rebel spies managed to steal secret plans to the Empire’s ultimate weapon, the DEATH STAR, an armored space station with enough power to destroy an entire planet.”

These words are the first thing that anyone ever saw of Star Wars as the film opened in 1977 and now Gareth Edwards has imbued them fully in Rogue One: A Star Wars Story.

The Rebellion’s struggle just got worse, as it learns that the Empire has created a world-killing weapon named the Death Star. The Rebellion finds itself on the knife’s edge between hope and despair. The council of the Rebellion cannot decide what to do. Do they risk it all by trying to steal the plans, or do they resign themselves to defeat and despair? Jyn challenges the council, “What chance do we have? The question is what choice”. She implores the council to remember that if they do nothing then they’ve sealed the fate of the galaxy and that evil this great cannot go unopposed. It brings to mind Edmund Burke’s famous saying, “The only thing necessary for the triumph of evil is for good men to do nothing.” She encourages them with a refrain Cassian Andor said to her earlier in the movie, “Rebellions are built on hope”. Hope changes everything, it reminds people that the way it is, is not how it has to be. Hope is the spark that, if kindled, creates the fire of change. Change is possible, but it takes sacrifice, determination and some times, lives to see it come about. “So now faith, hope, and love abide, these three; but the greatest of these is love.” It takes faith, faith that a difference can be made, which births hope and it’s all because the love of something greater than themselves leads them to live out the truth that, “Greater love has no one than this, that someone lay down his life for his friends.”

The beauty of the film is that hope is not just a figment of the heroes imaginations. The Force seems quite active, even without the Jedi. It’s moving in mysterious ways and bringing people together that can make a difference. This band of rogues does the impossible, one chance at a time, succeeding in their goal and setting in motion something that will see the end of the Empire.

Gareth Edwards made a Star Wars movie that feels completely different and yet utterly familiar, all at the same time. Like The Clone Wars, Edwards uses cinematic inspirations to pull in the war movie genre and make it a Star Wars movie, emphasis on the war. The nods to great war films of the past are all there and they work perfectly. On top of that you feel the “Star Wars” seeping out of every single frame. The Ghost from Star Wars Rebels can be seen at least 4 times, General Sydulla is called for over the coms at Yavin 4, the sets feel like they came out of a lost arc of The Clone Wars, Saw Gerrera has an important role and so much more. The point here is that Edwards lovingly knits together the history of the Prequel and the Original trilogy and it’s seamless.

Star Wars, when it’s at it’s best, is stretching what it means to be Star Wars by taking other genres and telling a story in the Star Wars universe that aligns with the themes of the saga. Edwards achievement is nothing short of incredible, the movie feels like the Maker’s fingerprints are all over it and it’s the highest compliment that could be paid to the movie.

The characters are outstanding. K-2so is the best new droid since R2 and Jyn, Cassian, Chirrut, Baze and Bhodi are all welcome additions to the Star Wars canon. Darth Vader’s scenes are chilling (and let’s stop here and just geek out completely that Vader’s castle is finally on screen!) and perfectly played, just enough to leave you wanting more.

The music by Giacchino feels like a welcome addition to the Star Wars franchise, it’s much like The Clone Wars music and only references familiar themes in snippets yet that’s a good thing. The movie needed it’s own identity and the themes he created feel familiar and distinct, perfectly matching the spirit of the movie.

I’ll get personal, this movie is everything I wanted a new Star Wars movie to be. Pushing the boundaries of what it means to be Star Wars while at the same time respecting the history and the franchise as a whole. Here’s to hoping the rumors of Edwards wanting to direct a Kenobi movie are true. Rogue One is rated 4.5 upside down Death Stars out of 5.

Side note, if you did not read the book Catalyst by James Luceno, I highly recommend it. It is the lead-in novel for the movie and it does a fantastic job of filling in everything you’d want to know about Krennic, the Ersos and the Death Star.

5 thoughts on “Rogue One: A Star Wars Story – Review”