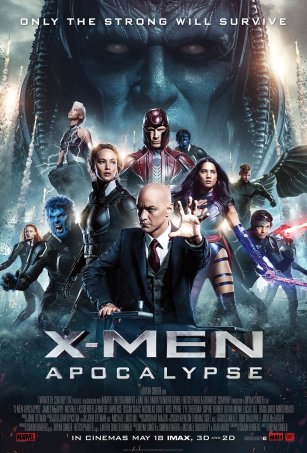 It’s already been a summer of superheroes with Batman v Superman and Captain America: Civil War, many people may have forgotten that there was a new X-Men movie as well. Following up Bryan Singer’s Days of Future Past, the team finds itself in the middle of the 80s and an ancient power has awoken which could mean the end of the world as we know it. X-Men: Apocalypse is just as much about it’s characters as it is about spectacle. Singer knows we come to see them and watch them grow and the film does not disappoint.

Eric’s story line is one of the most poignant. After the events of Days of Future Past, he has retired to Poland, works in a steel mill, married a woman (he told her who he was the first night they met) and they have a child. He’s happy in the small life he created until an accident at the mill forces him to use his powers to save a fellow worker. Word gets out who he is and before he and his family can escape, the local police capture his daughter, who is killed in a showdown. Enraged, Eric lashes out at the men, killing them all, leaving him screaming to the heavens, “Is this all I am?”. He cannot seem to escape the darkness within. It’s a clear reminder that there is something inside all of us that we cannot control, that is dark and evil and by ourselves we are powerless to control it. In the movie, it’s Charles, Raven and Quicksilver that help bring Eric back to the light, it’s part of the answer, to realize we cannot do it alone, dimly reflecting the truth of,

If we say we have no sin, we deceive ourselves, and the truth is not in us. If we confess our sins, he is faithful and just to forgive us our sins and to cleanse us from all unrighteousness. (1 John 1:8-9 ESV)

Apocalypse, also known as En Sabah Nur, believes himself to be a god among men. He believes that his power instills in him the right to rule. The gifts that he was born with have been used to benefit himself alone. On the opposite side you have the X-Men who learn to harness their power and use it for others and the betterment of the world around them. It’s a beautiful picture of what the Apostle Paul talks about in Corinthians when he discusses spiritual gifts,

The X-Men series has always been about coming together and Apocalypse is no different. in the fight against En Sabah Nur neither Magneto or Charles is strong enough to destroy him, it takes, Scott Summers, Jean Grey working in concert with everyone else to save the world. Thinking about the film brought the next part of the Corinthian passage to mind,

Each member of the team has a gift, that when combined with the others makes them even stronger. The gifts are meant to be used for the welfare of all of humanity and cannot hoard for ourselves, because we need each other. Each person brings strengths and weaknesses to the table and united we form a more perfect union.

I really enjoyed this movie. I love the new cast they have playing the younger versions of the people we know from the previous films and Quicksilver is still one of the best things in superhero films. The rest of the character work has me excited for what comes next in the series as hopefully we move to the 90s. Side note, this is how you make a joke about a Star Wars film. This film is rated 3.75 out of 5.