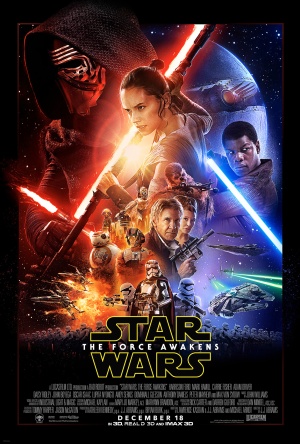 There are Spoilers in this review.

2013 was a massive year for the Star Wars franchise as George Lucas sold Lucasfilm to Disney for four billion dollars. Yet the biggest surprise from the deal was the announcement of more Star Wars films in the Skywalker Saga, meaning the long rumored sequel trilogy would finally come to fruition. Since that time, fans have excitedly and trepidatiously awaited December 17th, 2015 for Episode VII. Anticipation built throughout the year as the movie’s coming was heralded by soup cans and action figures alike. The film’s release has seen a maelstrom of emotion from fans and critics as The Force Awakens has become the best reviewed Star Wars film since The Empire Strikes Back, but the question is, “Is it really that good?”.

As I have gotten older, one of the joys has been the realization that the Star Wars saga is about more than just good and evil, it was George Lucas’ way of giving a history lesson about freedom. The Original Trilogy was about how freedom is won back from a dictatorship, the Prequel Trilogy was about how freedom is lost as bureaucracy and corruption undermine a democracy and now the Sequel Trilogy looks to be just as timely.

It has been thirty years since the Return of the Jedi and the galaxy has seen the end of the Empire and the beginning of the New Republic. As the Republic has taken hold and a new generation has been brought up in relative peace, the idea of vigilance against evil has gone out of fashion. The Republic keeps it’s fleet close to home and the loss of the Jedi to Luke’s nephew’s turn to the dark side has left the galaxy vulnerable. It has given rise to the First Order, a regime even more fanatical and bent on completing the failed mission of Darth Vader and the Emperor, bringing “order” back to the universe.

The New Republic, unwilling to acknowledge the threat of the First Order, secretly sponsors the creation of the Resistance, lead by Leia, while publicly denouncing them. Leia is a child of war, understanding the price of freedom and is willing to sacrifice again for it’s continuation. Unfortunately there is resistance to seeing the First Order as more than a phantom menace in the senate and the correlation could not be clearer to the situation we face in the real world with ISIS, which has challenged the entire western world yet certain world leaders refuse to acknowledge the full threat.

Another correlating theme is that of recognizing evil and facing it. Maz Kanata, the thousand year old bartender says to Rey and Finn, “The only fight: against the dark side. Through the ages, I’ve seen evil take many forms. The Sith. The Empire. Today, it is the First Order. Their shadow is spreading across the galaxy. We must face them. Fight them. All of us.” She sees the First Order for what it is and calls it out, it is evil and it must be apposed. What a timely message. We live in a world that is unwilling to call out evil for what it is and confront it, but Maz is absolutely correct that it must be named and fought. In this way, The Force Awakens proudly upholds the tradition that George Lucas began in A New Hope.

As wonderful as the themes are in the story, they are not all completely fleshed out in the film. To get the full picture one must dive into The Force Awakens novelization, Before the Awakening or the Visual Dictionary to get everything I mentioned above. Director J.J. Abrams has made a Star Wars film that is truly faster and more intense. It flies at a breakneck speed and barely slows down to let the character breathe. Unfortunately this leads to some scenes that would have fleshed out the political landscape as well as the motivations of the villains on the cutting room floor. Honestly, it seems like an over-reaction to the Prequel Trilogy and it’s frustrating since the politics here are a crucial story point and resonant theme for the times in which we live. It’s still the thing I have the biggest issue with in the movie.

Star Wars has always referenced and mirrored itself as Lucas would use themes and motifs in both trilogies to create the saga’s tapestry. As this new trilogy beginnings it’s clear that the same thing is happening, yet it’s not as well done as before. Regrettably The Force Awakens is much more than a homage or layer of the tapestry, it is a remake of A New Hope. Plot points line up almost perfectly as you think about each film and exact beats from Star Wars are repeated in The Force Awakens. Frustratingly this means that there is absolutely nothing surprising in the new movie, if you have seen A New Hope then you will pick up on exactly where this story is going including the death of a major character as well as the use of yet, another super weapon. The movie is clearly more worried about appeasing fanboys than truly inspiring the next generation of fans.

The true salvation for this film is the casting. Daisy Ridley as Rey, John Boyega as Finn, Oscar Isaac as Poe and Adam Driver as Kylo Ren are all phenomenal. They are the key to the success of this film as they immediately bring you into the story and it’s their performances that cover a multitude of cinema sins. By the end of the movie you will care about each of them and be so invested as to what will happen, you’ll be wishing Episode VIII was next month.

Alongside the new characters there are old favorites that have returned, Harrison Ford, Carrie Fisher, Mark Hamill and Peter Mayhew are all back. Ford has not been this engaging on screen in years and it seems he is firmly invested in doing justice to Solo, especially in light of his character’s demise near the end of the film. Carrie Fisher brings an understated grace to Leia which is a relief to anyone that’s seen her on the talk show circuit and Hamill has little more than a cameo, whetting the appetite of fans to know exactly what happened to Luke Skywalker.

Interestingly for me, it’s not the old characters or their stories that captivated me, it was the new. Sadly the meta knowledge of Ford’s desires for the Han character robbed me of the emotional impact it was suppose to have. The film’s adherence to the formula of A New Hope and The Phantom Menace where the old, wise character meets their end does the same since you can see his death coming for miles. There is also something that just does not seem earned in Han’s death, story wise it makes sense for the character of Han and Kylo, but it’s just lacking something for me personally. I find myself much more invested in the character of Rey and where she will go next. Daisy Ridley has cemented herself as a star with this performance which is good news for the rest of this trilogy. 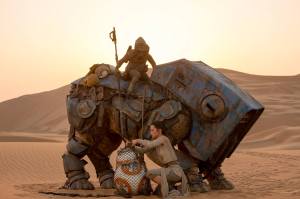 This has been the mantra of this movie since it’s inception. It’s a dig at the Prequel trilogy even though Abrams has praised the fact that without Lucas’ breaking every rule in his work on the Prequels, the new trilogy would not have been possible. Where this idea works best is in the character of BB-8. The result is astounding. I challenge anyone not to fall in love with this new droid and struggle to not name him their favorite as credits role. The way in which the onset effect and the sound effects work to create a fully realized character is incredible.

Where it did not work as well is with some of the creature design. The Happabore that drinks next to Finn on Jakku looks like a character from a Disneyland ride and the luggabeast that Teedo rides, lumbers at the pace of a desert turtle, making it the most impractical mount ever. In both places CGI would have been more effective in my opinion and more “real”.

With all of the incessant chatter about the practical effects, one of the best new characters in the film is CGI. Maz Kanata is an outstanding achievement in character design in the same way Gollum was in The Lord of the Rings. You truly feel like the character is on screen with Harrison Ford and it’ll leave you longing to know more about her history.

Strangely the CGI work at the end of the film is not as sharp as one would expect. The X-Wing battle above Starkiller base seems like an afterthought and looks muddled. The editing lacks the Lucas clarity in the geography of the setting and it’s one of the clearest examples of the magic he brought to the films truly lacking.

Another important piece that is missing from this new movie is the addition of exciting new ship designs. All the ships here are just variations on Star Destroyers, Tie Fighters and X-Wings and the new ships like Ren’s shuttle or the Resistance transport are either forgettable or just plain awful.

Sadly, there are also no fun alien cameos in the movie. Abrams seems preoccupied with creating new alien designs, which is fun but the lack of anything familiar in this area is a regrettable lack of connective tissue to the rest of the saga.

This is not the best Star Wars movie, that honor still belongs to The Empire Strikes Back, but it is a better one than I initially thought. It has some problems in the pacing, lack of clarity in the story and themes as well as a death that still leaves me numb. Furthermore, the movie lacks a score that is as strong as John Williams other work in the saga. There are a few nice cues and Rey’s Theme by far the strongest new musical motif, but you won’t find yourself humming anything as you did with the Imperial March, Duel of Fates or the Forrest Battle.

Seeing the movie four times has helped me to overcome a lot of the problems I still see and the performances of the new cast have me sold on this new trilogy. I would recommend seeing the movie more than once, since the first time can be a little jarring with it’s fast-paced nature and important story points almost glossed over because of it.  I’d give the movie 3.75 lost lightsabers out of 5.

Be sure to check out The 602 Club’s episode on the film, you won’t want to miss it!