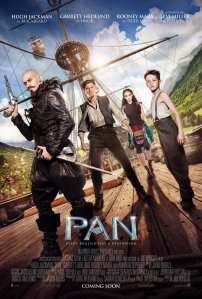 There have been numerous adaptations of J.M. Barrie’s Peter Pan since his original play in 1904 and novel in 1911. From silent film, to animation, to live action with a real boy, the story of Peter has captivated and enthralled people for generations. Now, Joe Wright, director of Pride & Prejudice as well as Atonement has joined with producer Greg Berlanti to bring us the prequel to Peter Pan, a time when Pan learns who he is and Hook is a friend.

One of the clearest themes of Pan is the way in which greed and obsessive love destroys the things we hold dear. Blackbeard is determined to hold on to his love Mary and to live forever. This leads him to hold Mary as a prisoner on his ship while at the same time destroying the faerie kingdom in search of their pixum (fossilized pixel dust)  which has the ability to rejuvenate one’s life, enabling them to live as long as they are supplied with pixum. This madness leads him to stealing young boys from the WWII era world and bringing them to Neverland to mine for the pixum he is so desperate for. Not only is the faerie kingdom his victim but Neverland itself, as it is slowly being mined into extinction for one man’s greed.

Blackbeard, like Anakin in Star Wars is so obsessively holding on to Mary that it drives her away from him. She’s saved by the faerie prince and their love creates a son, Peter, who is prophesied to bring an end to the terror of Blackbeard. It is Blackbeard’s greed that leads him to hold on so tightly to Mary and his life yet brings utter ruin instead.

It is a beautiful thing to see represented on the screen the idea of sacrificial love. Mary, sacrifices herself to protect her son and the faerie kingdom. Hook is willing to sacrifice himself for Tiger Lilley and Peter while Peter realizes that it’s not about being “the chosen one”, it’s about being willing to fight and die for something bigger than himself. In the end Peter will get most everything that Blackbeard is fighting so perilously for, life of eternal youth and the love of Mary. Neither of which come though greed but though true love, sacrificial love. A powerful message indeed. 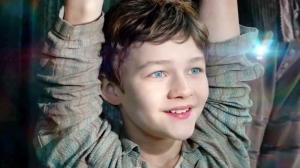 Pan is a good movie that never transcends to great. The beginning in the orphanage with the evil nuns is an overplayed trope that I find annoying. Also, the scenes at the mine don’t work as well for me, but once the film moves out into Neverland I’m hooked. One of my criteria’s for a good Peter Pan film is that Neverland feel timeless and for the most part Wright’s Neverland has that feeling. Bright, imaginative and yet tethered to yesteryear in a comforting fashion. On top of all this, Levi Miller is absolutely astounding as Peter. The most difficult thing to do is cast young talent who can truly carry a film and he has charisma in spades. The surrounding cast is great, with Adeel Akhtar’s Smee frequently stealing scenes with his delivery. In the end Pan is no where near as dismal as it’s Rotten Tomatoes score of 21%, it’s exactly what I expected, fun and enjoyable yet with surprising themes. Pan is rated 3 and a half mermaids out of 5.

One thought on “Pan – Review”