In 1950, the Walt Disney company had not seen much financial success from its animated films. Fantasia, Pinocchio and Bambi failed to capture the imagination of the public at the time, and the studio needed a hit. Cinderella offered the answer. Critically and financially it became the biggest accomplishment since Snow White and the Seven Dwarfs and helped restore the Disney company’s reputation as the premiere animation studio. Fast forward to 2014 and Disney has begun a long campaign of remaking its animated features as live action extravaganzas, starting with its greatest princess movie, Cinderella.

“Have Courage and Be Kind”

Going into the movie, one would not expect much more than the basic story seen in the animated feature. What Branagh has done is create depth in a story that many have derided as nothing more than an old fashioned and sadly outdated tale. This simple yet elegant theme, “Have Courage and Be Kind” is the heart of the movie. As the world clamors for more strong female role models, Cinderella would be the farthest from most minds as someone to share with their daughters. Too many times today, for women to be seen as strong they must be presented as bow-wielding, ass-kicking, leather-clad, tortured souls, yet this shows only one side of true strength. The greatest gift of this Cinderella is the reminder to the world that it takes the utmost courage to be kind, especially in the face of constant adversity. Most films give us sarcastic, mean-spirited people who use their painful experiences as excuses to treat people terribly. Crafted with a deft hand, though, Cinderella lovingly directs us to see that it’s easy to be cruel and almost impossible to be kind, unless you have courage. 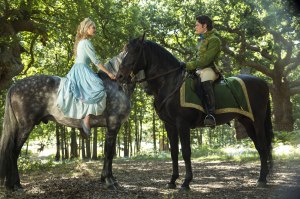 Another wonderful addition to the story is the meeting of Cinderella and the prince before the ball. Their meet-cute takes place in the woods where the prince is struck not just by her beauty but her virtue and character. He falls in love with her, not because she looks radiant in a dress, but because her true self, her inherent nature, reflects generosity and kindness. Cinderella is never afraid to be anything but who she is–she remains true to herself and her belief that everyone deserves to be treated with kindness and grace. Her strength emanates from the inside out admonishing all of us that it is virtue and good character that make people worthy of being looked up to.

Most people walking into the movie will not expect any surprises, yet Branagh is able to construct something that feels familiar while at the same time fresh, relevant and new. As Disney embarks on this quest to craft live-action versions of its classic films, they’ve created a firm foundation with Cinderella. Not only should you see it, take others to see it and enjoy the delight of a simple fairy tale made new.

One thought on “Cinderella – Review”