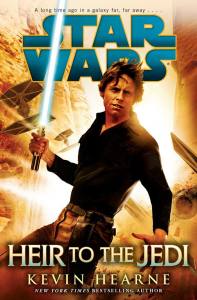 Heir to the Jedi is the latest book in the canon created in the wake of Disney’s purchase of Lucasfilm. Following the excellent A New Dawn and the disappointing Tarkin, Heir to the Jedi has a lot riding on it. This is a first person tale of Luke Skywalker, set after the events of A New Hope but before The Empire Strikes Back. Luke is sent on a mission by the Rebellion to recover an important defector from the Empire, along the way learning a few things about the Jedi and his own powers.

I was really looking forward to this book. Knowing it was about Luke and from his point of view before Empire had me excited. Here was our chance to get the canon answers to how Luke learns to control the lightsaber in the Wampa cave on Hoth as well as possibly integrate some of the prequel era information.

There are some good things here. Luke learning a small bit about the Jedi on Rodia as well as receiving another lightsaber was a highlight. The book did a great job showing how Luke is already eager to learn everything he can about the Jedi as well as understand more about his lightsaber and how it works. This will also help explain Luke knowing how to build a new lightsaber after the events of Empire. When the book is focused on the story of Luke as the heir of the Jedi, it’s working well.

Unfortunately the parts of the book about Luke as the heir to the Jedi are few and far between. Maybe I expected too much from the book in this regard, yet I felt a canon novel about Luke would delve deeply into this topic and while the scenes where it does are wonderful, it’s marred by a blasé story. The rest of the book just does not have the feel of Star Wars for the most part. The technology, the weapons and the use of technobabble, hamper that feel the films created, where that was just a vehicle to tell the story, never the focus or too recognizable.

The other big issue here and it’s the same thing that Tarkin ran into, is that the story feels disposable. It’s much like the feel you’d get with the old Star Trek books written while the series were still on television, all the toys had to be back in the box, the way you found them when you closed the book. As you reach the end, you don’t feel the reward of having read the story, as if you hadn’t read it, you’d be missing something invaluable to the whole. The Clone Wars did a marvelous job for the most part of making you feel like the series had value, it added to the characters and the over all saga. This new canon of books, aside from A New Dawn has failed to truly add anything of real value to the saga. The reader needs to feel like the story has weight and until that starts happening, many will be disappointed with this new book line.

I can’t recommend that you pick this up, but if you come by a copy it not a terrible diversion. Two and a half out of five stars.

Disclosure: This book was provided by Del Ray as an early review and in no way affects the thoughts or feelings of the reviewer.

2 thoughts on “Star Wars: Heir to the Jedi – Review”

#repost from @thenerdparty Newly Delivered #OwlPost! Chapter 150: Birthday Surprises. Harry has a new mission from Dumbledore, to retrieve the memory from Slughorn and his friends are divided on how easy they think this will be. In this episode of Owl Post: A Harry Potter Podcast hosts @dreacoffman and @mattrushing02 talk about the eighteenth chapter of #HarryPotter and the #HalfBloodPrince. We discuss insight into the characters, antidotes, Harry's cheek, talking to Slughorn, no luck, apparition training and a bad birthday. #wizardingwirelesscollective Stream below or subscribe to listen at: Subscribe in Apple Podcasts - http://bit.ly/oppoditunes Spreaker -http://bit.ly/oppodspreaker Spotify - http://bit.ly/oppodspotify Google Play - http://bit.ly/oppodgoogle http://bit.ly/opchapter150
#CloneWarsSaved! The series is back for its final season today! Oh how I have missed you! #StarWars #TheCloneWars
Woohoo! #TheMandalorian #LEGO
#repost from @nwcitizens This week The Academy starts its brand new series! February 23rd at 9:30am! What are the essential beliefs of Christianity? And how should a healthy understanding of doctrinal issues—like The Trinity, the Church, sin and salvation—impact the way we live and act toward God and others? We will all face times where our faith will be challenged either by other people or by difficult circumstances. That's why it's critical that we have a foundational knowledge of the core beliefs of Christianity and a willing heart to obey God.