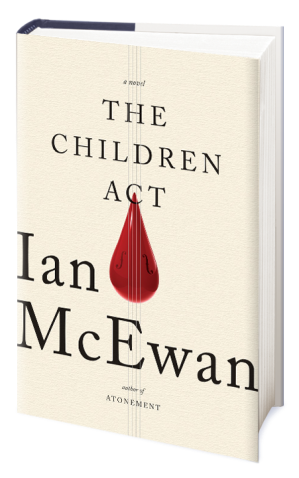 Ian McEwan’s latest book revolves around the world of family law. Fiona is a High Court judge working in the family division. She is constantly ruling on every known issue that could disrupt a family legally. As her marriage crumbles, the life of a Jehovah’s Witness family does as well. This family is fighting for the religious rights of their son who is soon to be 18. The state desires to save his life with a blood transfusion which goes against the teachings of The Watchtower. What follows is a clash of world-views with no clear winner.

McEwan’s book presents what appears to be two opposing world-views, yet with closer examination, they differ very little. Fiona clearly believes in law and order. Yet for her, what is right and best is founded on society-imposed ideas that shift as the sands, flowing from one “enlightenment” to the next. She thinks to herself while meeting with Adam, the boy in question,

“As he said this, looking at her directly, with no particular challenge in his voice, she believed him completely; he and his parents, the congregation and the elders knew what was right for them. She felt unpleasantly light-headed, emptied out, all meaning gone. The blasphemous notion came to her that it didn’t much matter either way whether the boy lived or died. Everything would be much the same. Profound sorrow, bitter regret perhaps, fond memories, then life would plunge on and all three would mean less and less as those who loved him aged and died, until they meant nothing at all. Religions, moral systems, her own included, were like peaks in a dense mountain range seen from a far distance, none obviously higher, more important, truer than another. What was to judge?”

Her world-view has started and ended with human thought. And with that as a foundation, the weight of any meaning in life cannot be sustained, all is meaningless.

The most interesting thing that the book does is try to set Fiona’s world-view against a sect of people who claim to know the truth and live by God’s Word. Yet when put to the test, their beliefs are shown to be all about them and the foundation was not God at all. Adam confesses to Fiona later in the book,

“My feelings came out of my religion. I was doing God’s will, and you and all the rest were plain wrong. How could I have got into such a mess without being a Witness…. Oh you know, wanting to suffer, loving the pain and sacrifice, thinking that everyone’s watch and caring and that the whole universe is about you…. That’s when I saw it as an ordinary human thing. Ordinary and good. It wasn’t about God at all. That was just silly. It was like a grown-up had come into a room full of kids who are making each other miserable and said, Come on, stop all the nonsense, it’s teatime!”

When belief is built on anything other than the immutable eternal, it cannot sustain the weight of pain, suffering and glory. Adam’s faith was about him, earning his place and suffering well for the cause as penance for forgiveness and acceptance by others and God. In the end, without a free gift of grace, his faith has no more meaning than Fiona’s.

“So you’ve lost your faith”

“…Yes, perhaps. I don’t know. I think I’m frightened of saying it out loud. I don’t know where I am, really. I mean, the thing is, once you take a step back from the Witness, you might as well go all the way. Why replace one tooth fairy with another?”

Fiona is on to something. We need meaning in this world. The thought that this is meaningless and oblivion is all that awaits the other side of the pine box leads to nihilistic suicide. Later in the book, Fiona eats a meal with her husband as he pontificates about the bleakness of the human condition and the inconsequential nature of time. As he speaks, she can feel his words weighing on her, causing her to leave the table because of her discomfort. The logical end of her belief system confronts her and sickens her for it’s lack of purpose.

At the end of the book Fiona finds out that Adam’s leukemia has returned and that he refused treatment. She believes strongly that he denied himself treatment as a form of suicide. She thinks,

“Adam came looking for her and she offered nothing in religion’s place, no protection, even though the Act was clear, her paramount consideration was his welfare. How many pages of judgements had she devoted to that term? Welfare, well-being, was social. No child was an island. She though her responsibilities ended at the courtroom walls. But how could they? He came to her, wanting what everyone wanted, and what only free-thinking people, not the supernatural, could give. Meaning.”

The book ends with Fiona lamenting the death of this boy, his loss of hope and her complicitness in his death. The sadness is that the meaning she desires, the meaning that was never truly Adam’s, is the meaning they both need. Meaning can only be given if there is a standard set above us, if there is truth outside us and not dependent on us. Meaning can only come from the eternal perfect, not the temporal fallen. Thank God that there is meaning and hope beyond oblivion.

But God, being rich in mercy, because of the great love with which he loved us, even when we were dead in our trespasses, made us alive together with Christ—by grace you have been saved—and raised us up with him and seated us with him in the heavenly places in Christ Jesus, so that in the coming ages he might show the immeasurable riches of his grace in kindness toward us in Christ Jesus. For by grace you have been saved through faith. And this is not your own doing; it is the gift of God, not a result of works, so that no one may boast. For we are his workmanship, created in Christ Jesus for good works, which God prepared beforehand, that we should walk in them. (Ephesians 2:4-10 ESV)

Adam keeps chasing Fiona for help and “enlightenment,” but she has nothing else to give. It shows how the offer of shared knowledge (books and new ideas), art (music, etc.), and relationships (his wanting to live with her) can’t always go as far as we want them to, even though that’s often the culture’s prescription to problems. The Children Act is well written and McEwan’s prose sparkles as per usual. The though-provoking nature of this book, along with the lack of sufficient answers to it’s timeless questions make it worth the read.

One thought on “The Children Act – Review”