In June of 1991 Heir to the Empire gave Star Wars fans something they had been craving since 1983, further adventures in the universe George Lucas created. Timothy Zahn’s book kicked off what became known as the Expanded Universe and for over 20 years thrilled, annoyed and satiated the fans desire for more Star Wars. With the sale of Lucasfilm to Disney and the plans for a new trilogy to take place after the events of Return of the Jedi, the expanded universe has been reclassified as the “Legends” line. Bits and pieces of it will influence future projects in the Star Wars universe, but none of what is seen in the Legends line is considered canon. A New Dawn is aptly named as it begins a whole new line of Star Wars tie-in merchandise. From now on, the books, comics, films and games will all work in concert, creating the whole saga.

A New Dawn is the prequel to the upcoming Disney show, Star Wars Rebels which introduces the genesis of the rebellion against the Empire. Set 14 years after the events of Revenge of the Sith and 2 years before Rebels, the galaxy is firmly in the grip of the Empire. John Jackson Miller uses his Soviet studies degree to full effect in creating the milieu that exists under the rule of Emperor Palpatine. Citizens are under constant surveillance and their importance is based solely on their usefulness in growing the Empire. Miller is able to weave in the topical issues of wire-tapping and corporate greed well without getting lost in the parallels. This time period feels perfect as the galaxy “obeys the master’s whip.”

The main villain here fits brilliantly. Vidian is a commercial opportunist with a Machiavellian streak rivaling Palpatine himself. He is willing to do what ever it takes to fulfill his desires even if that means destroying a world. He may be more machine than man, bringing to mind Vader, but his mind puts him on par with the most cunning villains Star Wars has had.

The true highlight of the book is the origin story of Kanan and Hera’s relationship. These two will be part of the main cast of Rebels and Miller chronicles what brought them together.

Kanan is a former Jedi who’s master was killed by Order 66. He received Obi-Wan’s message to avoid Coruscant and detection. Therefore he takes on the persona of a drunken rebel-rouser, who’s only goal is to make enough to earn that next drink. Kanan is a man adrift, feeling abandoned by the Force and the galaxy at large, he’s lost any sense of purpose. It’s inspiring to see him slowly learn throughout the book the meaning of being a Jedi, even if he can’t be one in the open. It’s about serving others and the greater good.

Hera on the other hand knows who she is and her mission from the beginning. She’s seen to oppression of the Empire, it’s evils and is looking to do something to challenge that. She understands clearly that change has to begin somewhere, “Ignition leads to reaction leads to detonation.” Miller really captures the spirit of rebellion in Hera. It’s the choices of ordinary people, every day that can make a difference and it starts with one brave soul, willing to stand up for what is right to inspire others. Hera is this person, clearly having that effect on every person she meets in the story, inspiring them to be their best selves for the betterment of others.

Hera and Kanan have the best banter this side of Han and Leia. It will be fascinating to see how the characters evolve as Rebels progresses. Especially in light of what is revealed in the book, that the Jedi ban on romantic relationships is not part of the Jedi Code but an addition to their rules for life later. These are the nuggets that will leave Star Wars fans guessing. Is this a set up for things we will see not only on the new TV show but also the new feature films as well? Only time will tell. 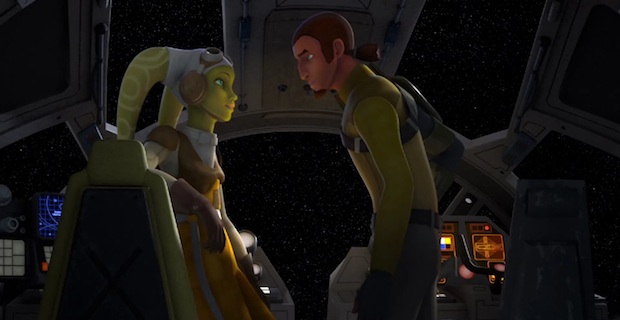 If you come into this book expecting a new Heir to the Empire you will be disappointed. This is every inch a tie-in novel. It’s boundaries are clear; introduce us to Kanan and Hera as well as the feel of the Rebels era and in that Miller soars. From the moment the book begins it just feels right. The atmosphere utterly represents the dark times, after the Clone Wars, but before the flames of rebellion have begun to spread. The secondary characters of Skelly, Zaluna, Okadiah and Sloane are all worthy additions to the Star Wars pantheon and hopefully will pop up in other novels.

A word of caution to Del Ray, Disney and Lucasfilm. If you are going to have the books, comics and games be canon they need to have weight. People need a reason to read or play, so make the stories important and not just filler. Agents of S.H.I.E.L.D. has suffered with this very issue, so please be careful to not allow this to happen with the these Star Wars properties. The fun of the now Legends line, were the big, galaxy altering events that took place. Just because there are new films or shows does not mean readers and gamers don’t want meat to the stories, something that matters. A New Dawn is a wonderful start to this new era, hopefully all that follows will be just as fun and meaningful to the overall saga of Star Wars. Rated 8 1/2 out of 10

Disclosure: This book was provided by Del Ray as an early review and in no way affects the thoughts or feelings of the reviewer.