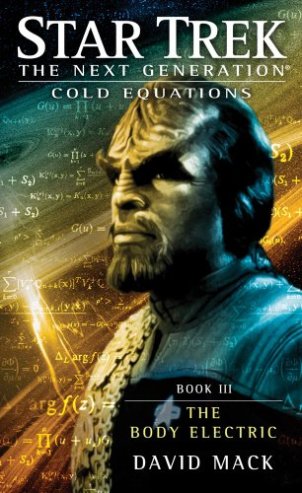 “I have a plan,” Wesley said, “But for it to work, you’ll have to be impossibly charming.” Picard couldn’t help but smile. “When am I not?”

If Star Trek has taught us anything it is this: All good things must come to an end. David Mack’s grand new trilogy has come to its conclusion. As with his last trilogy, this one changes the universe of Star Trek forever. What is different about this series is that while the changes are massive, it also feels more intimate. All of the best stories in the Trek universe are not just about action; they are stories that challenge us philosophically and mentally. This last book in the Cold Equations series does not disappoint in this respect. The questions raised are the biggest that humanity can ask, making this a satisfying and provocative finale.

One of the paramount questions of Mack’s latest series has been that of life and what constitutes true existence. The Body Electric, like V’ger before it, does not consider organic life to be valid. It may have been the creator of true life, but it is not true existence. Its argument against organic life is the following:

The difference here is culture vs. biology; for humans, information is collected and used to create our culture; the biology of artificial intelligence (AI) is information itself. The difference comes down to what is valued by the different creations because of their make-up.

The question about what constitutes a true life-form is still puzzling. The Body Electric does not seem capable of compassion or mercy — traits that sentient organic life hold very close. Also in question is whether or not AI has a soul. AI has sentience and is self determined, yet still lacks the intrinsic quality to jump a step beyond information to philosophy, religion, compassion and the synthesis of information into culture. The idea of a any kind of afterlife is also foreign. When a machine powers down or is destroyed, there is nothing left. However, even in the Star Trek universe, forms of being do exist beyond the physical realm for organic life. We have seen the evidence of this from many different cultures, including Klingons and Bajorans. The answer to this major question cannot be fully answered here, but wrestling with it is important because it is part of the foundation of existence.

One of the most interesting elements in this story is the idea of killing the creator. The Body Electric is willing to destroy any hope of new AI by eliminating all organic life in the universe. It recognizes that organic life gave birth to AI and only organic life is able of creating new, unique AI. Still, it does not consider it true life worthy of any reverence as a creator. Star Trek has shown us the death of creators at the hands of their creations before. For example, the Klingons killed their gods because they were too much trouble, and the ramifications of that were considered good for their culture. It should be noted, however, that such an action does represent as an outlier in the Trek universe overall.

Most intriguing is the short-sightedness of this plan. In killing the creators, The Body Electric would not only cut itself off from further development, but it would also destroy any hope of creating a lasting mark on the universe. This has enormous implications for life and raises so many metaphysical questions that this review simply cannot address them all (religion and philosophy have been working on them for millennia). Like all good Star Trek, it leaves us pondering life’s most vital questions.

What You Leave Behind 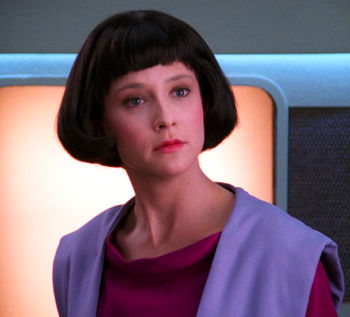 The Body Electric creates meaning for its existence by fashioning an intergalactic work of art that will span a billion years. It faces the same question that has plagued humanity forever: “What is the meaning of life?” The Body Electric has a sense that when the universe comes to an end, nothing exists beyond that end. So the question becomes even more profound: “How do you find the meaning of life when nothing transcends the end of time?” Where does the purpose of existence come from if nothing is eternal? The answer that Wesley and The Body Electric come up with in this story is to create something that lasts to the bitter end — but is this an answer? Is that not still meaningless, since it leaves no hope that anything will truly matter? The answer to this question is the most vital ingredient to any being’s life, what a person believes about the purpose of life, and how the metaphysical will shape the course of their future

Star Trek has showed us that for many races, there is something that exists beyond death, although it cannot be said for certain what that is. Even beings as advanced as the Q are not sure what happens after death. Also intriguing are The Prophets, who do not even exist in time. There are, as Spock would say, “always possibilities,” with so many of them yet to be explored.

It was fascinating that this book does not discuss the religious or philosophical ideas around the questions of life’s meaning and I think this stems from the reasons discussed previously. The Body Electric cannot think in those terms. It cannot transcend the data, think creatively, soulfully or philosophically.  This does not imply that The Body Electric is not valid as a life-form; it merely points out one of its weaknesses as a species.

As with the best of Trek, Mack pushes one of life’s biggest questions to the forefront and gives no firm answers, leaving the readers contemplating the answers for themselves.

David Mack’s Cold Equation series has done for AI what Destiny did for organic life: It completely turned things upside down. The Body Electric will challenge readers with the ultimate questions of reality and leave them feeling like they have witnessed the best of The Next Generation, which at its best, discussed life’s most important issues. Mack wraps in good character development as well. Worf, Wesley, Data and T’Ryssa Chen all stand out with great moments in this book. Mack has left the universe changed again, leaving readers eager to boldly go immediately. This book is rated 7 out of 10.