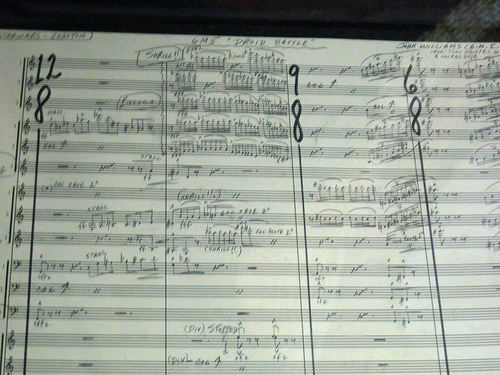 I’ll be up front. I like scores from films, and I have quite a few of them. Recently I have been listening to a lot more of them; this has been brought on by the re-release of the Star Trek scores which are being remastered and presented in full (nothing is better for a film score lover than to get your favorite expanded, it really adds a lot to the enjoyment). In light of these things I thought that I would share some of my favorites with you.

There are two types of scores out there: the ambient score and the thematic score. I was doing some reading on the two and thought I would just allow some people from the film-making industry tell you about them.

I do listen to music. Movie scores, exclusively, because it’s all about mood and nonspecificity. I love the way modern movie scoring is all about nonspecificity. You know, if I shuffled the tracks from Inception, I challenge you to tell me which is which. But … you feel incredibly heightened during all of it. I don’t know what I’m very excited about but I’m very excited. Or worried. Or sad, I’m not sure which, but it’s all happening. And that’s really great.

He is so right, ambient scores try to set the scene for you. These are not my personal favorites because there is none of that specificity in the music to tell you something about the characters, it is all about the mood music (even though, when done well I really enjoy an ambient score).

The second is the thematic score. I read through The Making of Star Wars by J.W. Rinzler a while back and remembered John Williams talking about the way he wanted its score to sound. He also happens to be the foremost thematic film score composer alive today (and possibly ever).

I think the music relates to the characters and the human problems, even when they are Wookiees, Williams says. This is the gut thrust of the thing in music – a very romantic theme for the Princess, a heroic march for the Jedi Knights….. What we needed where themes of our own, which one could put through all the permutations of a dramatic situation…… I felt we need our own themes, which could be made into a solid dramaturgical glue from start to finish.

What I enjoy most about this type of film score is that it not only informs me about the characters, but it also does a good job of taking me out of this world and pulling me into the world of the film. It is the glue, or as Jimmie Mac from the Forcecast likes to say, “It is the oxygen of the film”. So here are some of my favorites, I hope that you will comment and share your favorites, I am always looking for good scores to add to the iPod.

This is not only my favorite Star Wars film but also my favorite score. Williams adds to the brilliance of his work in the original film by giving us some of the most beautiful and iconic themes ever created for film. Each of them really makes this score shine. The depth and emotional complexity of the story is accentuated by the perfection of Williams musical cues. Who wouldn’t want to have a theme like Vader’s? Notable tracks are, The Astroid Field, Imperial March and Yoda’s Theme.

Harry Potter and the Sorcerer’s Stone:

I remember seeing this movie for the first time and the first three cords began and it was as if was was being transported into the world of Harry Potter. Williams had captured the magic of Harry in music and made us all feel as though we were part of that universe. Notable tracks are the Prologue and Hedwig’s Theme; even though, honestly, I love this whole score.

This is probably my favorite ambient score. I listened to this repeatedly during seminary as I studied and it got me though many long hours. The piano work in the film is exquisite. The tracks are more ambient, but at the same time sweeping themes work their way through the film and anchor us to the character of Elizabeth. Notable tracks are Dawn and Liz on Top of the World. If you like scores and don’t have this one, you should get it right now.

The Man from Snowy River:

This was one of my favorite movies as a kid. The grander of the Australian outback had the feeling of an old western. I have a personal connection to this score in that I learned on of the pieces on the piano as a kid. I loved playing it for people. This is a really fun score with surprising intimacy. Notable tracks are the Main Theme and Jessica’s Theme (Breaking in the Colt).

This is one of the newest score on my list. I find myself listening to a lot. It has such a melodic and listenable quality that I can turn it on while doing anything and be transported to Hugo’s world. Shore captures the loneliness urgency of the characters while subtlety reminding us we are in Paris. Notable tracks are, The Thief and The Invention of Dreams. 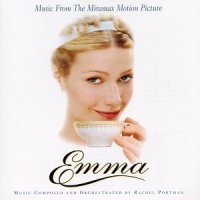 I have fond memories of this score. My dad feel asleep to it every night for more years than I can remember. Rachel Portman writes such beautiful themes for films and this one captures the fun, playful and heartfelt story Austen tells. It has the ability to make you feel joyful just by listening to it. Notable tracks are Main Titles and The Dance.

Jerry Goldsmith’s work on Rudy is a perfect example of a score completely setting the tone for a film and gluing every piece of it together. I dare you to listen to it and not want to go out and conquer your dreams. It’s rousing and hopeful melody will have you whistling for days. As an aside Jerry Goldsmith is one of my favorite film composers. Notable tracks are Tryouts and The Final Game.

This score has the privilege of being my first CD. This movie’s score blew me away when I saw it. The majestic nature of the main theme exudes the power that stands up to and accentuates seeing dinosaurs on screen (and for the first time they don’t look like a B movie from the 50’s and 60’s). I played the main theme on the piano as a kid and even now after years of not playing, I can still sit down and play the beginning few cords. Notable tracks are Welcome to Jurassic Park and Remembering Petticoat Lane. 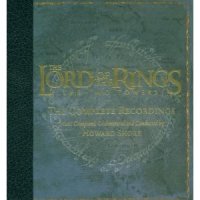 The Lord of the Rings: The Two Towers:

Again, you should be catching a pattern here, favorite film and favorite score from a popular movie series. This is a very thematic score, Shore does a brilliant job of creating the sound of the cultures in Middle Earth, so that when you hear certain refrains you automatically associate it with a people group. What makes this one stand out for me is the theme of the Rohan, it is haunting yet beautiful. This is an epic score and in it’s complete form is nothing short of a masterpiece. Notable tracks are Edoras and The Battle of the Hornburg.

This, like The Empire Strike Back is my favorite Star Trek film and score. This score has recently been updated to the complete score and I am loving it. What is so cool about it is that it sounds like Holst: The Planets: I. Mars, the Bringer of War. The darkness of this score sets it apart from the other Trek movies and establishes the tone for the Original crew’s final mission. Notable tracks are the Overture and Dining on Ashes.

There are many other scores that I love and just don’t have the time to talk about. Here are some  of them: The Mission, Lawrence of Arabia, Raiders of the Lost Ark, Star Trek II: The Wrath of Kahn and Casablanca. What are your favorites and why? Comment and let me know!

6 thoughts on “Oxygen of Films”