This is a fascinating video about the origin of the iconic poster that has had such an impact on the 21st century. One of the questions in the video is, “Why has a slogan, from a bygone era, captured our imaginations so?”

I was thinking about this after watching the video: Why does it?  “Keep calm and carry on” reminds us to keep going. As Robert Frost says, “The best way out is always through.” This simple phrase reminds us this is not the way it will always be, don’t overreact; live life and take what comes. Solomon reminds us in Ecclesiastes that,

“Keep calm and carry on” seems, in some ways, to be a reminder of this great truth.  Makes me think of something that has often been attributed to Solomon as well, “This too shall pass.”

All of this calm thinking got me ruminating about life and how it is always changing. In all that change there is so much that happens that we just don’t understand or is tough to slog through. Many times we are left struggling and striving in a million different directions and just wanting to pull our hair out. C.S. Lewis says this in Mere Christianity about God and his plans for our life: 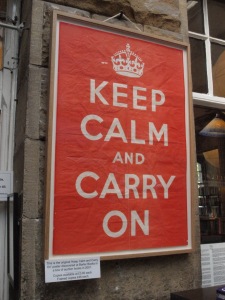 Of course we never wanted, and never asked, to be made into the sort of creatures He is going to make us into. But the question is not what we intended ourselves to be, but what He intended us to be when He made us. He is the inventor, we are only the machine. He is the painter, we are only the picture. How should we know what He means us to be like?…We may be content to remain what we call “ordinary people”: but He is determined to carry out a quite different plan. To shrink back from that plan is not humility; it is laziness and cowardice. To submit to it is not conceit or megalomania; it is obedience.

Here is another way of putting the two sides of the truth. On the one hand we must never imagine that our own unaided efforts can be relied on to carry us even through the next twenty-four hours as “decent” people. If He does not support us, not one of us is safe from some gross sin. On the other hand, no possible degree of holiness or heroism which has ever been recorded of the greatest saints is beyond what He is determined to produce in every one of us in the end. The job will not be completed in this life: but He means to get us as far as possible before death.

That is why we must not be surprised if we are in for a rough time. When a man turns to Christ and seems to be getting on pretty well (in the sense that some of his bad habits are now corrected), he often feels that it would now be natural if things went fairly smoothly. When troubles come along—illnesses, money troubles, new kinds of temptation—he is disappointed. These things, he feels, might have been necessary to rouse him and make him repent in his bad old days; but why now? Because God is forcing him on, or up, to a higher level: putting him into situations where he will have to be very much braver, or more patient, or more loving, than he ever dreamed of being before. It seems to us all unnecessary: but that is because we have not yet had the slightest notion of the tremendous thing He means to make of us…

Imagine yourself as a living house. God comes in to rebuild that house. At first, perhaps, you can understand what He is doing. He is getting the drains right and stopping the leaks in the roof and so on: you knew that those jobs needed doing and so you are not surprised. But presently He starts knocking the house about in a way that hurts abominably and does not seem to make sense. What on earth is He up to? The explanation is that He is building quite a different house from the one you thought of—throwing out a new wing here, putting on an extra floor there, running up towers, making courtyards. You thought you were going to be made into a decent little cottage: but He is building a palace. He intends to come and live in it Himself.

Remember Paul’s words in Romans, “For I am sure that neither death nor life, nor angels nor rulers, nor things present nor things to come, nor powers, nor height nor depth, nor anything else in all creation, will be able to separate us from the love of God in Christ Jesus our Lord.” So, keep calm and carry on as God continues to create you into something beautiful.